“Telling Tales with Tankas” ~ Today’s poem is an ancient form of Japanese poetry, “Tanka,” which has been called, “The Grandmother of Haiku.” This is one of the oldest forms of poetry. It originated in Japan during the 7th century. Unlike Haiku, which we will do later on and which tends to focus on nature, these poems allow for emotional expression and were often written by both men and women as private messages to their lovers. Tanka poems usually tell a short little story about love, a moment, an event, a feeling, etc.

A “Tanka” poem is an unrhymed Japanese poem consisting of five lines ~ actually, it’s kind of like some crazy “run-on” sentence as only the first word of the first line is capitalized and the period goes at the end of the very last word of the last line, with no need for commas along the way.

Be sure to COUNT OUT your syllables so you get it right. This is a poetry form, not free verse so we follow the instructions. J Here is that handy little syllable counter if you need it: SYLLABLE COUNTER

You will probably have to go back and turn the beginning of each line back into a lower case letter as your word program is going to want to capitalize the first letter of each line.

And here are a couple of my past examples and a brand new one this year:

“Timing of Posts is EVERYTHING”

even when among my friends

but no one responds to it

(A Tanka poem doesn’t really need a title; up to you) 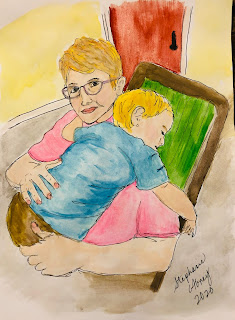 I look around me
surrounded by family
I know I am blessed
could anything be better
than having a grandchild’s love?

I pause at day’s end
and reflect on my blessings
I lead a charmed life
a grandchild climbs on my lap
that is all the proof I need.

PLEASE REMEMBER ~ any poetry found on this blog, written by me, is my personal property and may not be used without my permission, other than sharing it as an example in a lesson or to read it to someone. The same goes for any poems that are shared in the comments of this blog or elsewhere online as a result of this challenge. They are the creative property of the person who writes them. These poems are their original work and no one may use them without their permission. It is understood that they own the copyright to them as soon as they create them and especially once they post them. Thanks so much!

*** Also, if you choose to post your poems on your own blog ~ that’s awesome. But PLEASE don’t just copy and paste my daily instructions, but rather post your poem on your blog or your FB wall or wherever AND LINK BACK TO THIS BLOG POST for others to come here to read the instructions. I’ve spent considerable time researching the poetry forms and writing them up to share with you. Thanks for respecting my work.

Posted by Stephanie Abney at 1:46 AM

My sneezing is loud
and my nose runs constantly
my allergies win
and my Spring has mixed blessings
but still each day is lovely.