“My Son Never Saw the Ocean”

Greetings - I decided I would share another one of my essays from the writing class I am taking. My instructor has already graded it (got 100%). Sweet. It's rather personal since it was a personal narrative essay assignment. I share it in hopes it will touch hearts and help others.


“My Son Never Saw the Ocean”
by Stephanie Abney
My delightful, active and previously healthy ten-year-old son, BJ, lay silently on the doctor’s examination table. He was pale, clammy, feverish, nauseated, and his lips were devoid of color. “I’m sending you to a Pediatric Hematologist Oncologist. Do you know what kind of doctor that is?” our family physician asked. I knew. He didn’t have to say more.
At the hospital BJ received life-saving blood transfusions while he endured one test after another, including a spinal tap and bone marrow aspiration. The following day the doctor spoke the words that forever changed the lives of everyone in my family, “I’m very sorry to tell you this, but your son has Acute Lymphoblastic Leukemia.”
Faith, hope, and love became our lifelines. Every moment became a memory. We were the recipients of dozens of acts of service. As news of BJ’s illness spread, so did the number of people who would be there for our family. Not only did they touch our lives, but BJ and his courage touched the hearts and lives of everyone who he came in contact with him. 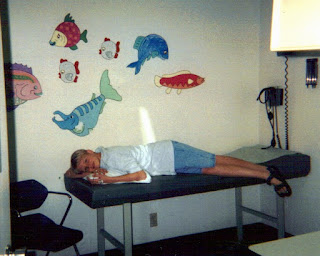 BJ and I soon became “regulars” at the Cancer Clinic and Phoenix Children’s Hospital. On the way to the clinic we made up silly songs. Once inside, they would call him back, hook up the plastic bag filled with chemotherapy drugs to his port-a-cath, a direct line to his bloodstream surgically implanted into his chest. Six hours later, we made the 45 minute drive home, usually in silence, followed by a great deal of vomiting and misery for BJ.
It wasn’t long before BJ came to me holding out a clump of his gorgeous tow-head blond hair, “Look, Mom.” Soon, he was completely bald. “Well, at least it will grow back,” he said optimistically. BJ was known for looking on the bright side. It made things easier. 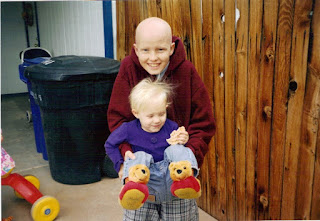 The next Sunday BJ was well enough to go to church, which was rare. Smiling in their seats were several men in the ward and some boys in BJ’s class who had shaved their heads, years before the look became popular. BJ smiled and said, “Swell,” one of his favorite words.
Back at the hospital, “So, what’s going on in here?” a nurse asked as she poked her head into BJ’s room after hearing little chirping noises. BJ was full of fun, even under dire circumstances and seemed to be a magnet, drawing friends and hospital personnel into his room. BJ had a quick smile and a kind word for everyone he met. He made time to talk to the elderly and to little kids. BJ was a favorite uncle among his nieces and nephews.
Whenever the doctor asked BJ how he was doing, BJ would always reply, “I’m swell.” More than once I overheard the doctor leaving instructions at the nurses’ desk telling them to monitor him carefully because he never really complained and they would have to be watchful.
When times were good, BJ went to school, making lasting friendships. His art work won “Best of Show.” He was loved by his fellow students and his teachers. New students told me that BJ was the first to welcome them. He held doors open for the girls. One boy said, “BJ brought the art of being a gentleman back to campus.”
Sometimes BJ was in an aggressive phase of chemo which made him violently ill. He’d be too weak to get out of bed. Other times, his chemo was part of an oral dose maintenance phase when could do more things. The summer BJ was 14, he felt well enough to fulfill the requirements needed to earn his BSA Eagle Scout award. He made improvements to a local bird sanctuary for his Eagle project.
After battling cancer for five years, BJ rallied. We dared to think this was behind us until he complained of pain in his eyes, hip and knee. The doctor couldn’t find anything. BJ’s blood tests were in a fairly normal range. We were sent to an ophthalmologist who tried to address the pain in his eyes. BJ even received injections directly into his eyes. The infection remained.
Our ophthalmologist made arrangements for BJ at the UCLA Eye Center in California so a specialist could look at the infection in BJ’s eyes. The thought of seeing his widowed grandpa in California where I grew up and getting his first glimpse of the ocean made him excited for our trip. (We always seemed to visit at Christmas and never went to the beach). BJ got the wind knocked out of his sails when the specialist found leukemia cells in BJ’s eyes.
“This sucks,” he said as we walked to the car. It was one of the rare times he expressed how discouraged he was. It was April of 2000. I couldn’t convince him to go to the beach after that. We returned home to Arizona without BJ even dipping his big toe in the ocean.
The doctor who had treated him with great care for five years gave BJ less than a 5% chance of survival even with an aggressive chemotherapy protocol. Our courageous son was done fighting. He refused treatment, with our support.
Six months later, our precious son, Brian James, tiptoed on the edge of this life before quietly slipping into heaven, two months after his sixteenth birthday. BJ lived six months longer than the doctor predicted. I think it was BJ’s gift to us. All the seats in the Stake Center were filled, to the back of the cultural hall and even up on the stage, when we held BJ’s funeral. He had touched many lives in his short lifetime.
I treasure every memory of my son. I will always miss him, until we meet again. In the meantime, I see a handsome blond, blue-eyed young man doing a work for his Heavenly Father that only he can do. The Lord needed a faithful young man who is as tough as woodpecker lips. And He found one in BJ. 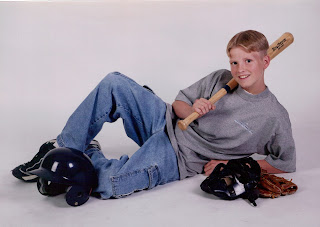 BJ left a legacy of faith, hope, and love. I will always be grateful that God trusted me enough to be BJ’s mom, even if it was only for one short season. I know I will see him again. How am I doing? Surprisingly, “I’m swell."