"I Had Trouble in Getting to Solla Sollew, I mean . . . Taiyuan, China"

Well, the blog heading wouldn't allow for the ‘strike outs’ so I'm reposting the title here:
"I Had Trouble in Getting to Solla Sollew Taiyuan, China"
(My China story – part 2 ~ see part 1 in previous post, dated Feb 24th ~ yeah over a month ago. Sheesh)

~ One of my all-time favorite books by Dr. Seuss is “I Had Trouble in Getting to Solla Sollew.” It’s a wonderful story about a young protagonist who sets out to reach Solla Sollew. He thinks getting there will solve all of his problems (now, I never thought that going to China would solve anything for me, but I did venture out with great optimism, as does our hero in this charming book). Yet, at every turn, something goes wrong and it seems he will never get to his journey’s end. Finally, the story concludes with an empowering life lesson as our hero learns he can and must plow right through his troubles and keep on going. In the end, he experiences much personal growth. By the time I got to Taiyuan, China – I felt a great deal like the main character in Dr. Seuss’s book. And I came home with many new life lessons – I highly recommend it (Both the book and going to teach in China).

And I also want to say before I share this part of the journey – that I left China very much in love with the people and the country and everyone involved with “Impact Exchanges” and “Newshape International Education.” But getting there was, well ~ you’ll find out. I don’t blame anyone for the craziness; it was just a series of unfortunate miscommunications, wrong directions and bad luck …

What an adventure! At this point I suppose I should tell you who was part of this remarkable experience with me (for their personal privacy, I’ll only use first names). There was myself, Shelly (a delightful fellow writer, substitute teacher, wife and mother, in her 30s), Amber (single, college grad, in her 20s, adorable, professional – also works part-time for “Impact Exchanges”~ she went to China for a couple of months last summer so she knew the ropes and was in charge of our little group of teachers), Trent & Nat (a darling married couple – no kids yet – Trent is a successful businessman and leader in the automated security field and Nat – short for Natalie, but since the director of “Impact Exchanges” is named Natalie, we shortened Trent’s wife’s name to Nat. She is a Dental Hygienist; both are in their 20s). All four of these teachers were from Utah. And, unexpectedly, Natalie (the founder of “Impact Exchanges” and also from AZ), came to be with us for the first week. I was really glad she came as she has been to China numerous times, is a personal friend and I have known her for many years.


Getting from the US to China was pretty crazy. The Utah teachers flew into Phoenix Thursday night. Shelly stayed with us – the rest with Natalie. We left my house for the Phoenix airport at 4:30am on Friday morning Jan 22 (flight left at 6am) and we didn't get to our Beijing hotel (really a hostel) until 8:30pm Saturday, the following night!! We flew to Dallas, had a layover that really was only enough time to change planes and then we flew to Beijing. (Experienced a major time change, too – China is 15 hours ahead of AZ). The flight from Dallas to Beijing was over 7,000 miles and nearly 14 hours long. I tried to stretch my legs every hour or so but the aisles were so narrow. I watched three movies on the way over. There was lots of turbulence the last 20 min. I don't mind turbulence; it kind of feels like an amusement park ride to me, but two of our group threw up quite a bit. We landed at 2:05pm Beijing time on Saturday afternoon. (We were to travel by train the next day to Taiyuan).

Once we got through immigration (which didn't take that long), and meandered through the airport with trams, stairs, and escalators galore, we were finally met at the baggage claim by one of Chen’s employees, Vivian, age 22; cute, fun, darling and very anxious that she get us where we needed to be. She continually tried to gather us much like a mother hen, saying “Hurry, hurry, hurry.” I soon came to love Vivian – but in all honesty, she may not have been the best choice to meet us as she had only been to Beijing twice in her life and did not know her way around. And although she spoke English, I’m not sure she always understood us. She would just nod and say, “Yeah, yeah.” But at least she was a native Chinese speaker – that helped when it came to talking to taxi drivers and such. Nevertheless, there was some miscommunication going on (something sweet little Vivian apologized to us about profusely as we were about to leave to go home. Bless her heart – she felt so badly about how long it took us to get to the hostel and then the next day – well, we missed our train… yeah, but not her fault).

Anyway, it took us over SIX hours in the freezing cold from the time we landed (mostly walking … sometimes running to catch the subway, and an insane SHORT taxi ride that dropped us off a considerable distance from our hostel/hotel) to get to our destination!! (Beijing Hyde Courtyard Hotel)

DESPITE the fact that the hotel website says they are about 16 km from the airport – that’s like 10 miles. Yikes!! My first impression of Beijing is that they have stairs EVERYWHERE!!!!! Oh my heck. I think I must have climbed no fewer than ten very long staircases, (airport, subway stations, and just around town) some having several landings. And we were dragging all of our luggage with us. I could never have made all those stairs with my luggage by myself. Thankfully, Amber managed to grab at least one of mine along with her backpack and duffle bag already over her shoulder and plow right up those stairs like a mountain goat. She's 26 and very beautiful as well as lean and STRONG. (There were a few escalators but I still struggled with my luggage. Thankfully, Amber and the other teachers always helped me out).

So, sadly, while we were going through one of the subway turnstiles, Natalie’s phone was stolen – with her wallet that had her credit card and driver’s license as well. AND, the phone number and address of the hostel we were to stay at was IN HER PHONE. So, there was a lot of guessing about where we were going. I don’t even know what all went on because it was so freezing in Beijing, literally. It was –7°F (the "feels like" button on the weather app said “feels like –22°F”) while we were traipsing all over Beijing so we could barely talk to each other or even look up, keeping our heads down against the wind. We got lost on the way to our hostel, dragging all of our luggage behind us. It also made it pretty impossible to stop to take any pictures, and it was getting very dark. The website said it was about an hour drive by car (which seems long to me to travel 10 miles – must be the way the roads are set up) or under two hours by subway with some walking and yet it took us SIX hours. It's just a long crazy story. 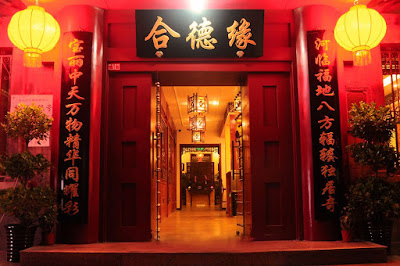 When we finally got to our hostel (a very ornate, cool, old building) we were exhausted and crashed around 9 pm (no dinner). It was so brutally cold that we couldn't really enjoy seeing anything and we were rushing the whole time. As it turned out Shelly and I got the only room that the heater didn't work. And of course, it was UPSTAIRS! Ugh.


It was so brutally cold that we couldn't really enjoy seeing anything and we were rushing the whole time. As it turned out Shelly and I got the only room that the heater didn't work. And of course, it was UPSTAIRS! Ugh. 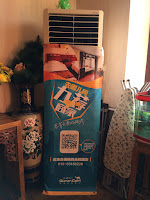 I had on my underwater w/ thermals over them, knit pants, FOUR pairs of socks, a high-neck tank, 2 long-sleeved shirts, a hoodie, gloves and Jim's stocking cap on to sleep in. Shelly was bundled up too. It was a rough first night in Beijing. We found out in the morning all the other heaters worked great. Really?
The hostel was charming – a 400 year old building here's a pic of the heater in the lobby  – yeah – that tower thing with heat coming out of just the upper vent.

Here's a pic of the open area inside – a couple of cats were cuddled up on the couch. The towels on the floor were because it was wet. Not sure why. Rain? Leaking? I don’t know. 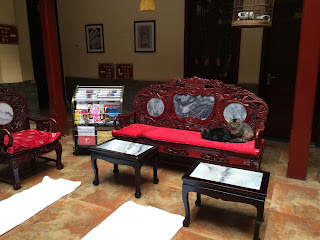 And here's a pic that Trent took of the eating area – so bright and colorful!! I didn’t even see this part until the next morning – Amber and Shelly went out to find some breakfast for us and brought it back and we ate in this fun room … 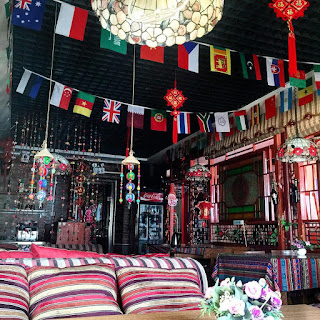 Think that’s long enough for now – I’ll post about what we did in Beijing the following day and the train ride to Taiyuan next time. So, you can kind of see why I said we had trouble in getting to Taiyuan. Cheers!!

And if you want a link to that cute Dr. Seuss book ~ here ya' go:
I Had Trouble in Getting to Solla Sollew