If you add only one Christmas book to your collection this year, you need to add An Angel on Main Street by Kathi Oram Peterson. If you know anything about me, you know I have a bazillion books, poems, stories and movies about Christmas. I love a good Christmas story and this one really fits the bill. It is such a pleasurable and satisfying read.

I was instantly drawn into the story with Kathi's delightful first-person narrative told from the viewpoint of schoolboy, Micah Connors. He and his widowed mother and his little sister moved to Bolton, Idaho to get a fresh start. Micah promised to behave and as the “head of the house” since his father died in the Korean War, he desperately wants to help out and please his mother. However, a series of circumstantial events has him constantly in the path of the Sheriff, Garth Anderson.

Micah is suspicious of the Sheriff’s interest in his family. He is also preoccupied trying to uncover the secret of the mysterious wooden structure that suddenly appeared in the center of town. Micah thinks it looks like a stable and his little sister, Annie, who is very ill, thinks it holds the key to a miracle that could make her well again. She is sure angels are building it, but Micah gave up on angels and help from his Heavenly Father long ago. Each day Annie grows worse and each day the town awakens to a new addition; animals, shepherds and more. A few days before Christmas Micah has convinced himself if he can discover the baby Jesus before He is placed in the manger and bring Him to Annie to hold, she will not die. It’s up to him. Little does he know the many hands that are waiting to assist him in his quest. Yes, there must be an angel on Main Street.

Congratulations to Kathi Oram Peterson for crafting such a delightful story. I couldn’t put it down. You can view a trailer of her book on YouTube at:
http://www.youtube.com/watch?v=QTrKWOhKY9k

You can purchase this wonderful Christmas story at: Seagull Book - do a search by title


It’s time to turn on the Christmas music, break out the hot cocoa and settle down with a good book. I suggest An Angel on Main Street! Enjoy!!
Posted by Stephanie Abney at 12:31 PM 6 comments:

I thought I’d share some thoughts (random though they may be) and hopefully some of what I say will add to your celebration.

On October 3, 1863, President Lincoln proclaimed the last Thursday in November as a national day "of Thanksgiving and Praise to our beneficent Father." Here is an excerpt from the text of Lincoln's proclamation … after listing some of the blessings the nation had received, Pres. Lincoln said:

“No human counsel hath devised nor hath any mortal hand worked out these great things. They are the gracious gifts of the Most High God, who, while dealing with us in anger for our sins, hath nevertheless remembered mercy. It has seemed to me fit and proper that they should be solemnly, reverently and gratefully acknowledged as with one heart and one voice by the whole American People. I do therefore invite my fellow citizens in every part of the United States, and also those who are at sea and those who are sojourning in foreign lands, to set apart and observe the last Thursday of November next, as a day of Thanksgiving and Praise to our beneficent Father who dwelleth in the Heavens.”

On Tuesday, my class led our school’s morning ceremony. They did a great job and the entire class recited an adorable Thanksgiving poem in unison. It’s one that my daughter, Shannon, now 37, memorized in the first grade and I have loved it ever since. For your pleasure, I share it with you now:

There lay upon the table
A turkey big and round
But when it was time to cook it,
It was nowhere to be found.

They all looked in the kitchen
And in the pantry well.
They asked Kate if she'd seen it
And John and Anna Bell.

Even tiny Mary,
They asked her if she knew,
Where the missing turkey was.
She said, "Of course I do.

Poor turkey wasn't feeling well
Because he lost his head.
So I put my nightie on him
And tucked him in my bed."

I hope you all have loved ones to share this special day with. We will be gathered together with many extended family members for a wonderful lunch, prepared by all who attend. Then in the evening some of our family members are bringing and serving Thanksgiving dinner to the families that reside at the Ronald McDonald House near Phoenix Children’s Hospital.

May you have a blessed day!
Posted by Stephanie Abney at 10:35 AM 1 comment: 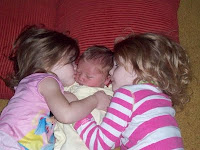 Taylor & Payton cannot get enough of their new little brother!! So sweet.


Brian (named after his uncle B.J.) weighed 9 lbs. 2.6 oz and was 22 inches long. He is so wonderful. Other news is that Adam has been accepted into Medical School and so they will be moving in January. (Happy for him – sad to say good-bye to their family for even a short time).

Life is so crazy busy that I haven’t written on this blog since September? HOW did that happen? School is great (but I’m constantly involved in it … just ask my family). I’m grateful to have such a supportive and sweet man-servant, I mean, husband (LOL). He frequently has dinner on the table when I get home because I have been putting in such long hours. By the way, JIM is the one who called himself a "man-servant." What would I do without him? He's such a keeper!! Love him more every day.

Well, just wanted to post about Brian. Got to run. Hope everyone is well and happy. Love and Blessings to all!!!! :)

Jessica Drew photographed our sweet little Brian when he was just 13 days old and you can see his pictures at: http://jessicadrewphotography.blogspot.com/2009/11/newborn-pics-so-cute.html ~ she is a remarkable photographer.

Posted by Stephanie Abney at 2:20 AM 2 comments: