How did I end up in China?


So, if you know me personally, you might know that I recently went to China to teach English for two weeks at an “American Experience English Winter Camp” held during their winter break from school. I have been promising to share some of my experiences here on my blog. It will need to be in several installments ~ this is the first:

I have a friend here in Arizona, Natalie, who has been working with foreign exchange students for quite a few years. She has been the regional director of a non-profit student exchange organization and her family has hosted numerous exchange students in their home. In fact, when I was teaching at American Leadership Academy in Gilbert, Arizona (and one of Natalie’s sons, William, was my student), Jim and I hosted the Chinese teacher of a group of students who came for a brief visit to the United States. It was so much fun having her in our home.

In the spring of 2011, Natalie discovered a Chinese high school was looking for teachers for their summer camp and looked into how she and others could teach in China. She and another son, Daniel, founded "Impact Exchanges" and took a team of teachers to China in 2013, and in 2015 they taught over 600 students in eight cities.

I would see her post about it from time to time, saying there were openings for teachers (I retired a few years ago), but it was never at a time when I could go . . . until she posted about the “Winter Camp” for 2016. It was to be a 2 week “American Experience” English Camp for Chinese students who were on their winter break. With travel time and all I would be gone for about 2 and a half weeks from Jan. 22nd to Feb. 8th. It really intrigued me. I wondered how it would even be possible to accomplish much of anything in only two weeks, but I really wanted to go and find out. I was also excited about the upcoming Chinese New Year – Feb. 8th – (the day we were leaving), but we would at least be there for their New Year’s Eve.

Pretty soon it was all I could think about. I mentioned to Jim and I don’t think he really believed I was serious at first. My passport had expired so I hurried and applied for a new one and put a rush on it. I prayed about it and soon I knew I needed to go. As a volunteer teacher, you do pay to go, but the cost was reasonable for what we got in exchange: airfare coming and going, hotel and all meals, transportation, and admission to any sightseeing we might do. We had enough in our account for me to go and I soon found myself filling out the application, sending in my resume, and figuring out what I needed to do and buy in order to be ready.

I tried to find a friend to go with me but none of my teacher friends around here could make it. I did reach out to my FB friends, and Shelly, a fellow writer, and a substitute teacher in Utah, felt like this would be her opportunity to go, too. We had only met briefly at a writers conference or two in years past and were more of just social media online friends – noticing each other’s activities now and then, but still, she was a kindred spirit and I was excited for her to come and to get to know her better. They made us roommates and we had a BLAST together. We got along great, despite my being about 30 years older than she is. Not to mention that made me basically forty years older than the other three teachers who came, also all from Utah. I figured if I didn’t go this year, I might not ever get the chance to go.

Funny thing, though, the first suggested location was in southern China and the weather wasn’t that much colder than what we were experiencing in Mesa, AZ so I figured no problem. I totally skimmed right past the actual location (which had been changed) when I filled in the application – NORTHERN China – where it was FREEZING (literally) in the winter. That really took me by surprise. I realized my oversight only two days before we were supposed to leave. YIKES!!! I ran around trying to secure warm enough clothing, etc. and get everything ready in time.

Natalie has found “Chinese partners” to work with who are educators, etc. who want to be able to provide this type of experience for Chinese students. We were to work with a young man named Yufei Chen, whom we simply called, Chen. He was a very savvy and successful businessman who is also passionate about education. Besides running his own company, he works with a “training center” called, “Newshape International Education”

in Taiyuan, Shanxi Province, China, where students can come after school and during summer and winter breaks for additional learning by way of private tutoring and other classes. It was in this facility that we would teach our lessons to the Chinese students. These were students whose very dedicated and devoted parents could afford to pay for their child to come to this “English Camp.” Surprisingly, Chen, who was born and raised in Taiyuan, said it was a moderately small city . . . of only 4 million people. Yeah, it didn’t seem small to me. 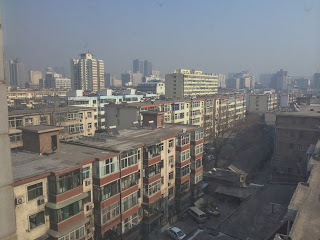 We were also responsible for lesson plans for 2 key subjects that we would teach to the entire group (about 30-35 students for the winter camp) in the morning and then have activities to support it for the classes we divided into afterwards, each of us having a smaller group, based on age and/or English proficiency. But I knew very little of how any of this would work until we actually arrived and began to teach. We were each asked to suggest two subjects we might have some expertise in to teach and submit it to see if our choices got approved. I chose leadership skills for one of my subjects. ALA, where I taught was a Stephen Covey Lighthouse School and his seven habits of highly effective people were incorporated into our daily lesson plans. However, we used the program for students and I taught the “Seven Habits of Happy Kids.” The other subject I suggested was poetry. I run an annual “poetry challenge” on my blog each April, National Poetry Month, and thought I would have some ideas that we could use for that subject. Both of my subjects were approved. Each of the other four teachers did the same thing so there was a subject each day of the two weeks. (More on that later).

I had no idea how this “American Experience English Camp” would be accomplished when the teachers didn’t speak any Chinese. I wasn’t sure what I was getting myself into and I really had no idea what to expect. I honestly didn’t think it was possible to make any kind of “impact” in two weeks.

Posted by Stephanie Abney at 3:43 AM 2 comments: