The Watchers Book 1: Knight of Light by Deirdra Eden

Do you love adventure? Fantasy? Medieval England? Fairies? Witches? Pixies? Demons? Mystical creatures with unique personalities; some fun, others dangerous? Just to name a few of the character types you will run into in "Knight of Light" by Deirdra Eden, Book One of The Watchers Series.

This is an exciting tale of an orphan girl, Auriella. "She's not a witch; she's not human either. She's something much more powerful." And Book One, "Kinght of Light," leads you on an adventurous journey of self discovery, with Auriella, to learn who she actually is; someone who has the power to change this world. Don't miss this middle grade/young adult book that encourages the reader to be have courage and be strong. It is fast-paced and a quick and entertaining read; newly released and already a bestseller.


The Watchers Book 1: Knight of Light

In England, 1270 A.D., Auriella (pronounced yurr-ee-ella) flees her village after being accused of witchcraft. Pursued by nightmarish creatures, she struggles to accept the truth about her humanity. Filled with fairies, dwarves, pixies, dragons, demons, and monsters, Knight of Light is an enthralling tale that will capture the imaginations of readers young and old.

The Watchers Series has been described as Braveheart meets Supernatural. The mythology for the series is based on many theological texts from dozens of sects with correlating themes. Ancient writings include The Dead Sea Scrolls, The Traditional Apocrypha, The Pearl of Great Price, and The Kabbalah.

“The Watchers” are supernatural beings in human form whose duty it is to protect and guard mankind from the armies of darkness. Unfortunately, as the Book of Enoch mentions, some of these Watchers go bad. Although the mythology is based on these texts, Deirdra Eden’s The Watchers Series is written in a traditional fairytale style with a young girl’s discovery of incredible, but dangerous powers within herself, a cast of humorous side-kicks, a quest for greater self-discovery and purpose, and villains of epic proportions

"My goal in writing is to saturate my books with intrigue, mystery, romance, and plot twists that will keep my readers in suspense. I want to see fingerprints on the front and back covers where readers have gripped the novel with white knuckles! Aside from writing, I enjoy jousting in arenas, planning invasions, horseback riding through open meadows, swimming in the ocean, hiking up mountains, camping in cool shady woods, climbing trees barefoot, and going on adventures."
-Deirdra Eden

Posted by Stephanie Abney at 5:00 AM No comments:

Many of you may have read one of several posts that were making the rounds on FB and on various blogs about NOT using the “like” button on Facebook status updates or even on other people’s comments. This post by Elan Morgan prompted me to give this experiment a try:

“I Quit Liking Things On Facebook for Two Weeks. Here’s How It Changed My View of Humanity”

"The Like is the wordless nod of support in a loud room. It’s the easiest of yesses, I-agrees, and me-toos. I actually felt pangs of guilt over not liking some updates, as though the absence of my particular Like would translate as a disapproval or a withholding of affection."

That is exactly how I felt. To me, “liking” something on FB meant:

And the number one message hitting the “LIKE” button sent (from my perspective) was, “You are NOT invisible.”

How many times have you posted something interesting, cute, clever, fun as can be, or even serious and important and your post just sits there?

Even if they did, they didn’t have the DECENCY to be supportive enough to hit the “like button.”

Here’s a little poem I wrote about it one day when no one was commenting or “liking” my post on FB and it was making me feel rather insignificant.

"Timing of Posts is EVERYTHING"

Feel invisible
Even when among my friends
I say clever things
But no one responds to it
Darn that Facebook anyway.
© 2011 Stephanie Abney

Yeah, I never wanted to be THAT person – so I freely and regularly “liked” just about everything. That’s how I rolled all the years I have been using Facebook.

What was interesting to me during my little experiment, is that NOT “liking” status updates forced me to stop and say something about them instead. And that brought about an entirely different “feel” and experience to my time spent on FB. It didn’t have to be a huge comment, just actually say something more than “like.” The result was one of showing a feeling of support much more so than the rapid-fire “liking” of nearly everything.

I noticed I felt calmer and happier when I was on FB. I had much fewer ads show up in my newsfeed and posts from friends I seldom heard from online started scrolling through a newsfeed that was no longer hijacked by my frantic “likes.” It was quite interesting.

An article, How to makeFacebook work better for you: Quit the ‘Like’ by Dylan Tweney at "Venture Beat" points out:

"Stop liking things, and Facebook eases off the marketing messages, letting your friends’ updates come to the fore."

There's another great article about it: The FacebookExperience Without a Like Button which points out: "Disappearing the social network's most-used feature forces us to actually say nice things to each other."

And there are those who warn that using the "like" button, especially on "stories at large" that "tug at your heartstrings" are started by and used by scammers:

However, I have since returned to using the "like" button, because, well, I LIKE it. But I find that I no longer do it automatically. I am now a more judicious user of the "like" button. Now I take the time to comment more often and I am enjoying FB more than ever.

There is a whole science behind Facebook's algorithm. But in the end, it's still not human. And the human touch is what makes the difference in all of our lives. So, let's be kind to one another. Don't ignore your friends when they are online - MAKE A COMMENT; make a difference!

Through the Years ~ Celebrating 44 Years of Marriage! 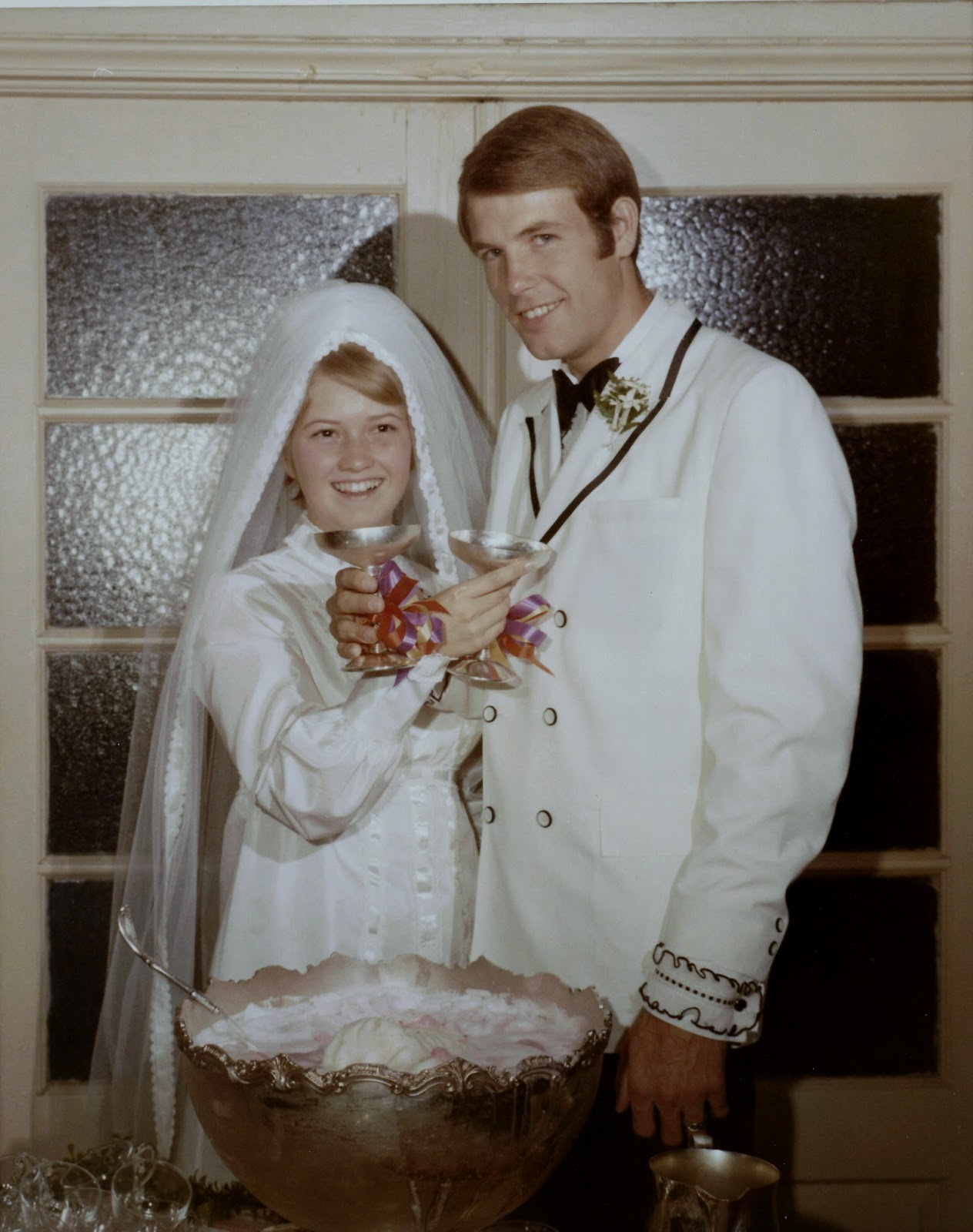 So, I'm slow to get this out there but I wanted to share how Jim and I celebrated 44 years of marriage. It's really hard to imagine. That's a VERY long time. It has been full of some unexpected and some unwanted lessons, to say the least. But also full of love and despite some pretty rough spots I would do it all again.

We were married on Aug. 5, 1970 in the LDS Los Angeles Temple for "Time and All Eternity." 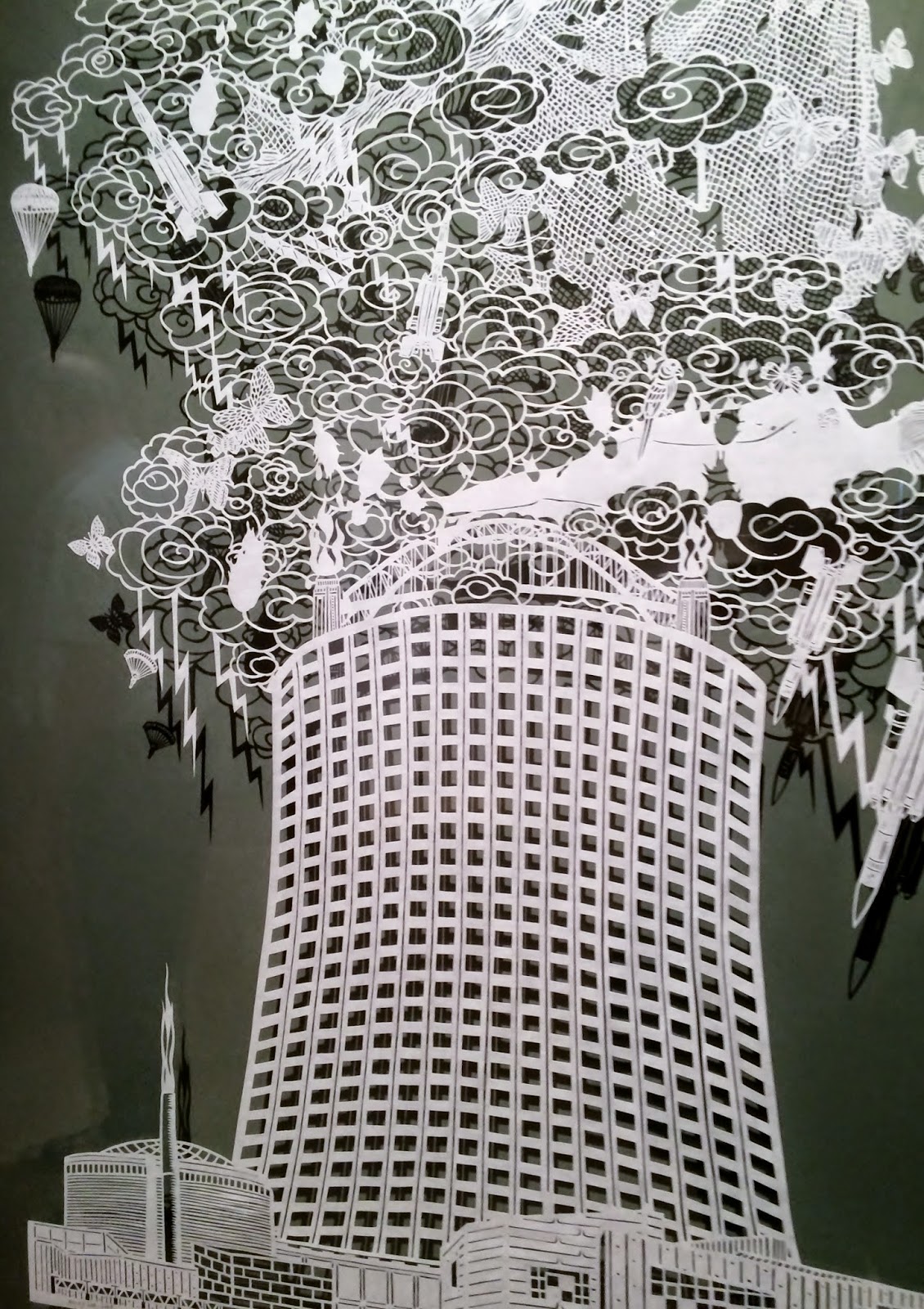 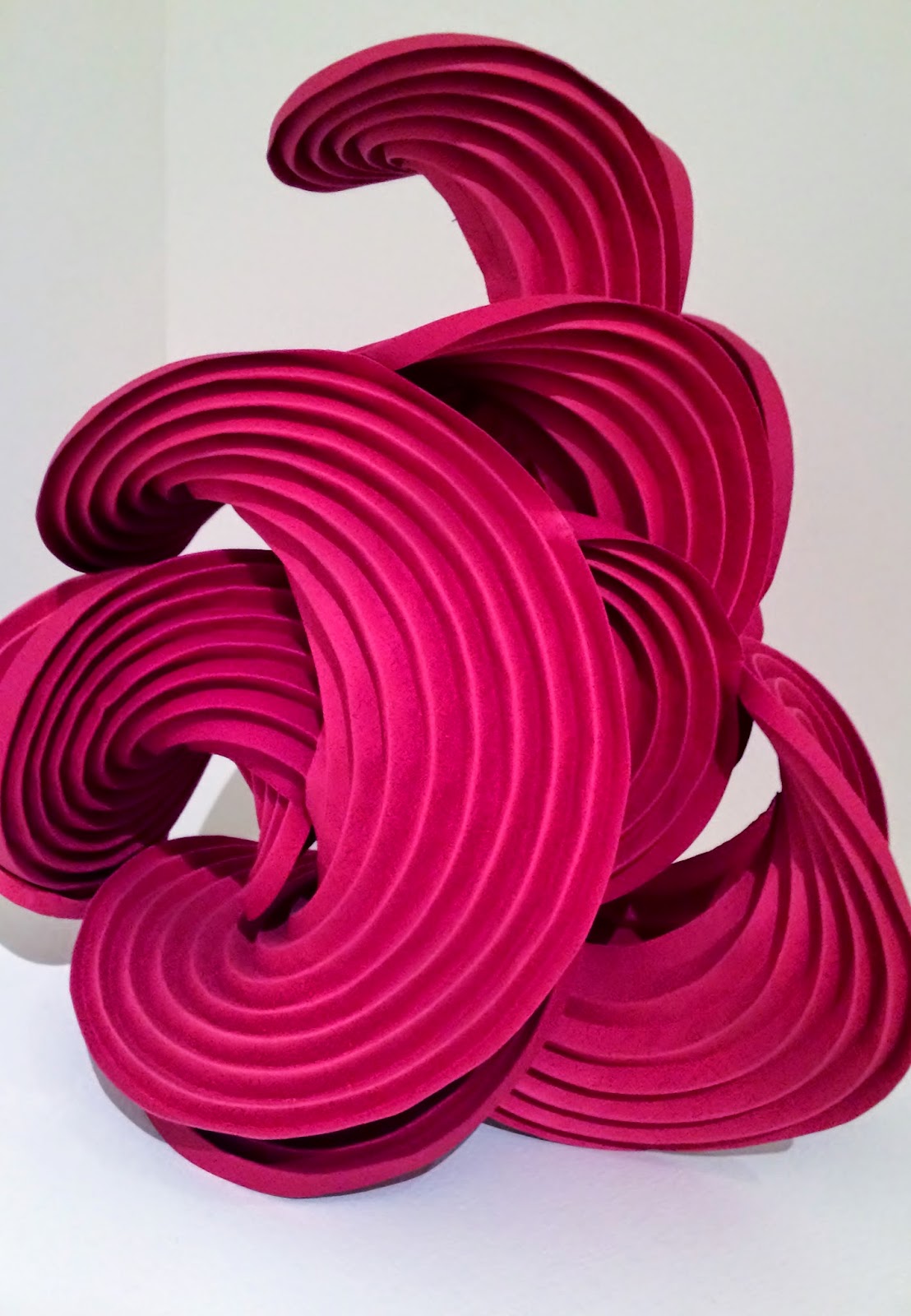 So, 44 years later we set out to celebrate:

The next was Paper Art from several artists - most of it was intricately cut & assembled paper, 3-D structures & some wall hangings. To the right, the pink-looking work of art is by Erik & Martin Demaine - cut out of watercolor paper and painted. 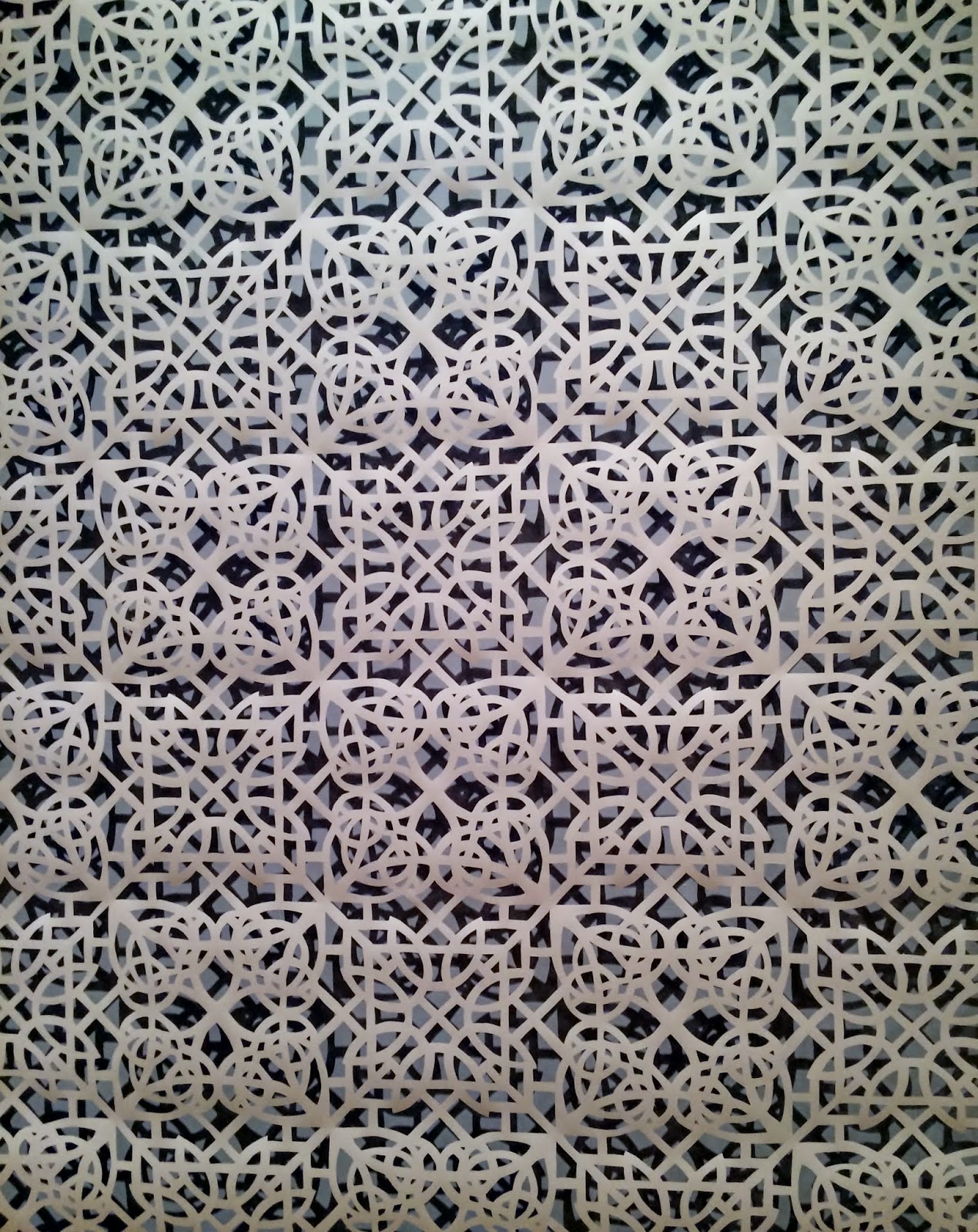 This may look like lace or something but it's cut out paper.
By Reni Gower - acrylic on hand cut paper.

The last exhibit I have mixed emotions on. Fascinating & disturbing (to me) because it was book art. The thought of altering or damaging books in any way really gets to me. But it was amazing - only front/back pics of one item.

OK, this is the back view - you can see the books stacked up on each other to create the "statue" the artist, Long-Bin Chen, of New York, made using books. He calls the piece, "Renaissance Man."

And this is the front of "Renaissance Man." By Long-Bin Chen. The previous pic shows the books he used to create this by carving it and then painting it. The info card said Chen is actually making a statement about human consumption & waste. It also mourns the pre-digital ear of bound books. 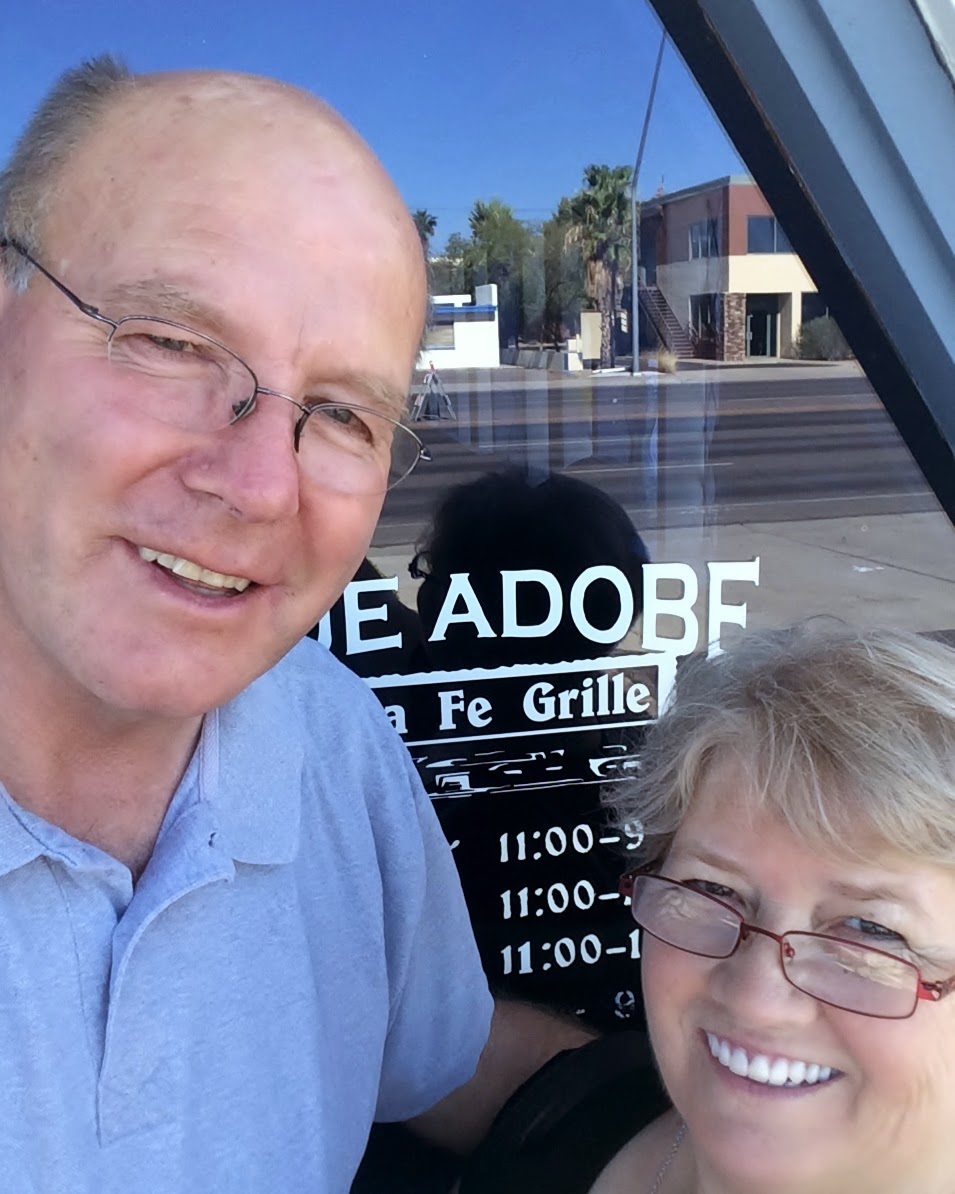 After we went to the Mesa Arts Center, we had dinner at the Blue Adobe Grille. It was the first time we had ever been there. I looked up the top ten restaurants in Mesa. It was on the list - we loved it. Jim had a chimichunga, rice & beans while I had - wait for it - SALMON - of course. Ancho Chile Rubbed Salmon, to be precise. You can't tell from the pic because it is smothered in Chipotle Tomato Relish. It was fabulous!! And the Green Chile Potato (yeah, that ORANGE potato) & sautéed veggies were delectable!! (Jim doesn't like "hot" food but mine was perfection). When they found out it was our 44th Wedding Anniversary - they gave us a FREE Crème Brûlée to share. It was the 1st time either one of us had tried it. Yummy!! Yeah, we'll be back. 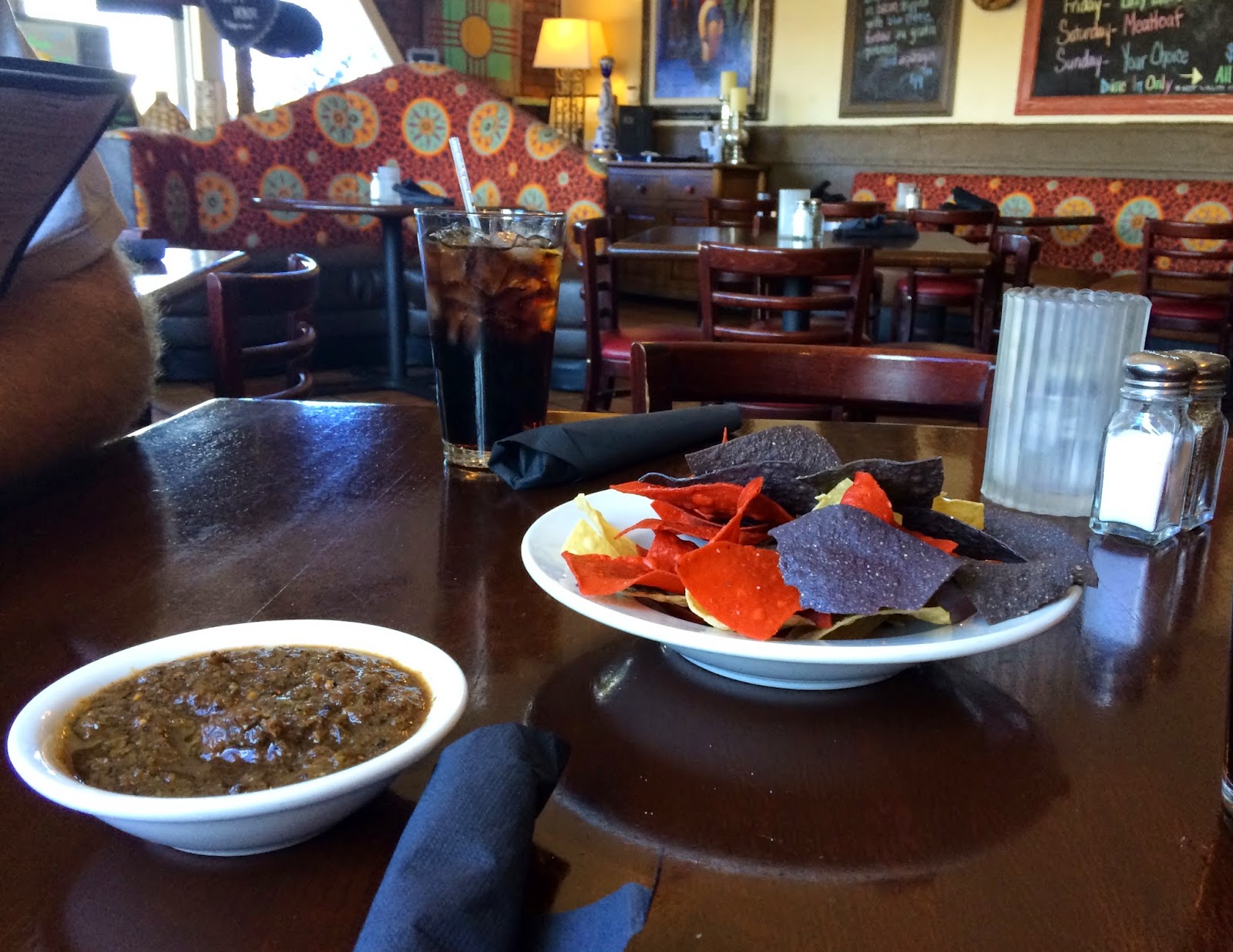 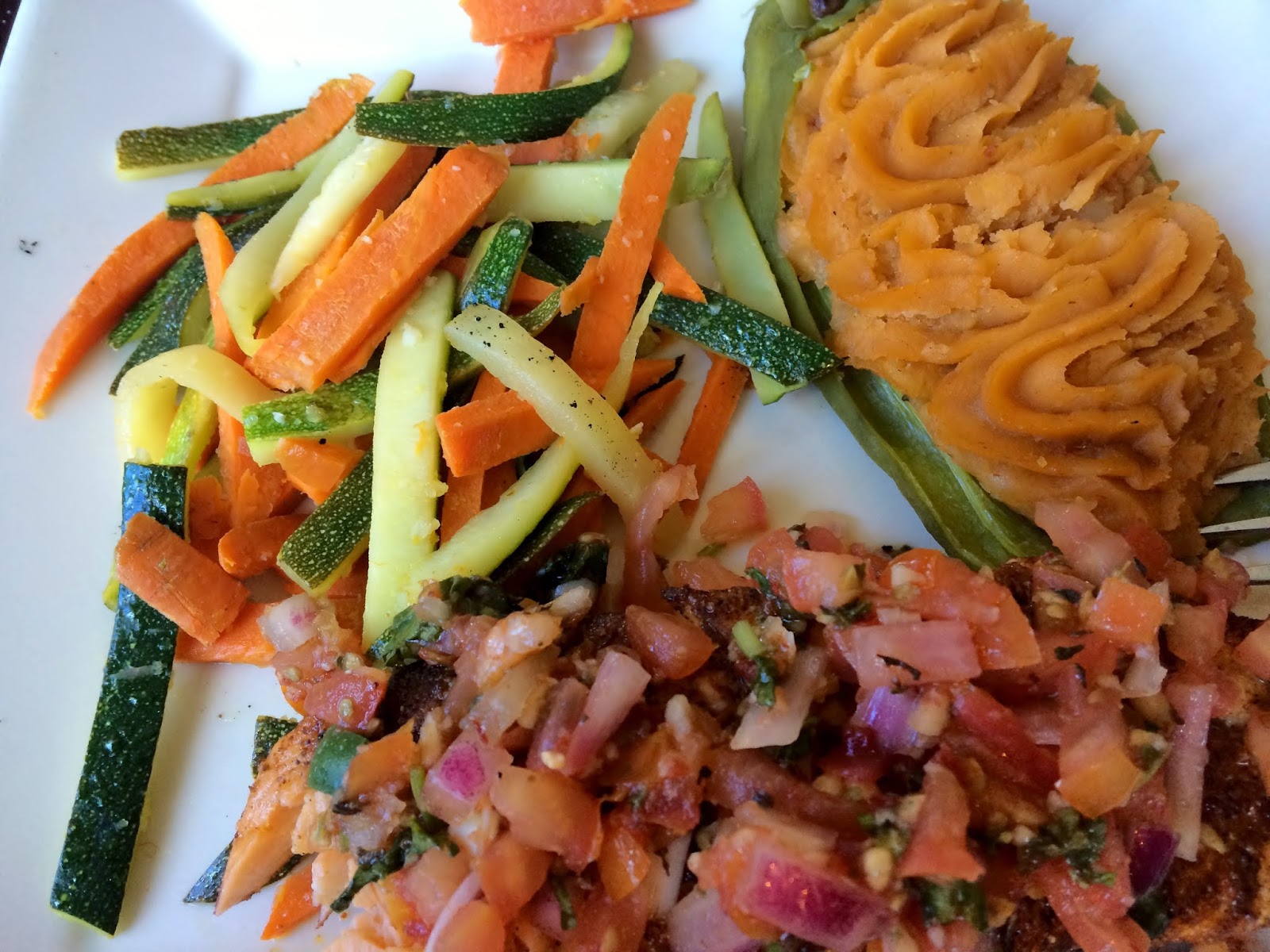 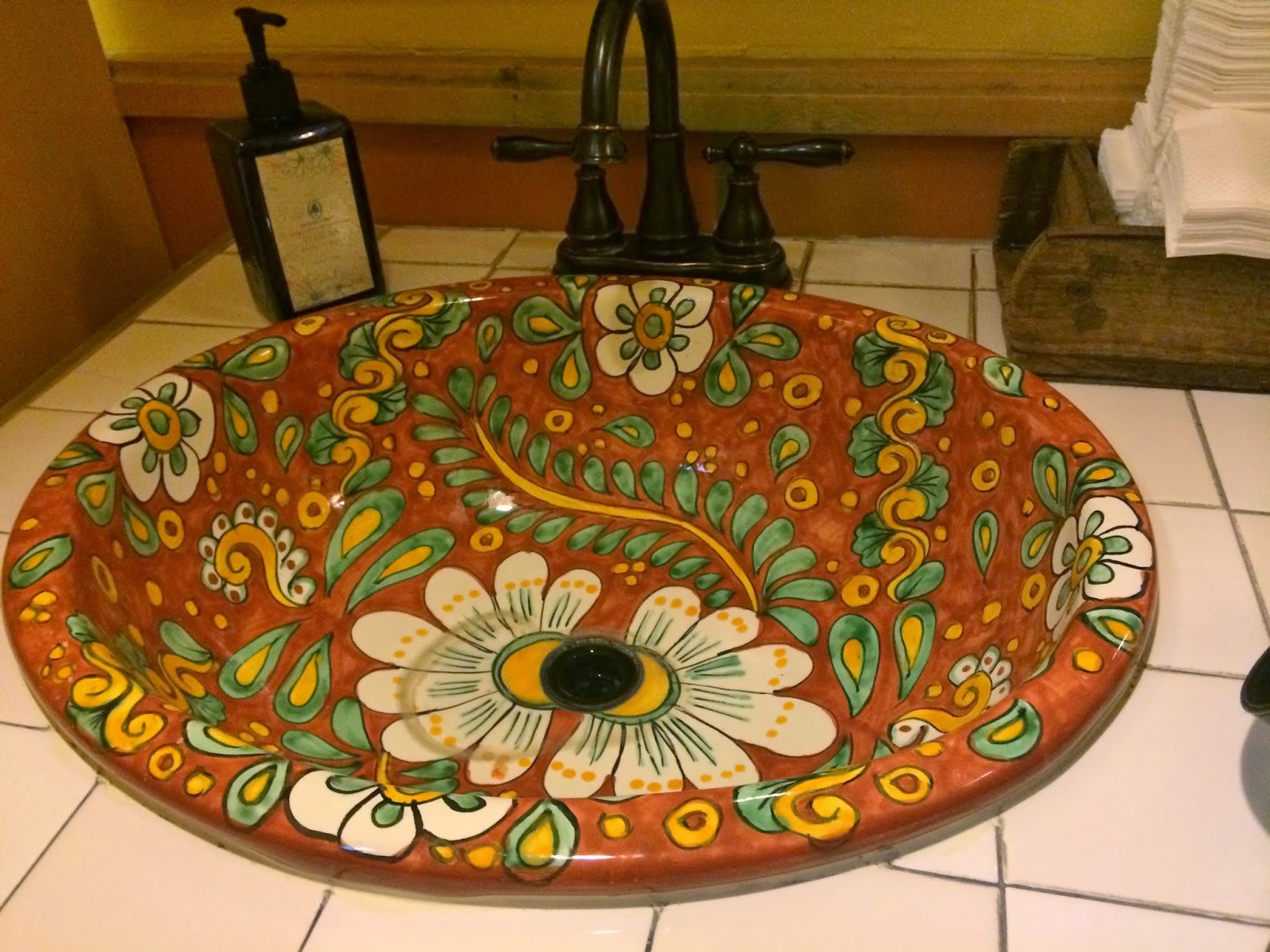 And I thought the sink in the ladies room was so cute that I took a pic of it too!!


The last part of our 44th Anniversary Date was to go to the movies where we watched, "Guardians of the Galaxy." TONZ' of FUN!!! 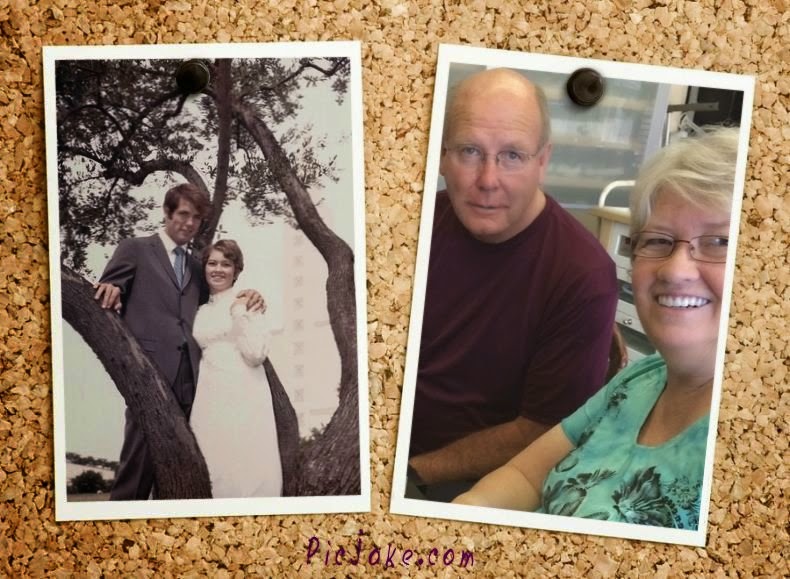