Let's have some FUN ~ ever heard of a Clerihew Poem? Well, they are FUNNY POEMS ABOUT WELL-KNOWN PEOPLE or about PEOPLE YOU KNOW (Or not. You can write a clerihew poem about anyone ~ BUT, they ARE ALWAYS about SPECIFIC PEOPLE and intended to be FUNNY 4-line poems).

Other than that, there are no set beats or syllables to worry about.

It's a fun little poem about a PERSON, generally someone famous OR you can make it about someone you know. Often whimsical, it's meant to be funny (not rude or crude funny, but cute funny).

Here’s what you do:

FOUR lines:
(If you wish to use a Title then it is to be the person’s name)

The FIRST line NAMES the person
* AND the endings of lines 1 and 2 need to rhyme with each other.

Then tell something fun about them and make the last line funny
* AND the endings of lines 3 and 4 need to rhyme with each other.

Here is an example by the creator of this poetic form:

JAN VAN EYCK
The younger Van Eyck
Was christened Jan, and not Mike.
The thought of this curious mistake
Often kept him awake.
~ By Edmund Clerihew Bently

Remember, a clerihew poem is meant to be humorous.

My sweet, good husband works hard and plays hard and then crashes on the couch – we have DOZENS of photos of him asleep. I wrote this clerihew poem a few years ago, but I still love it and so I’ll share it as my example. 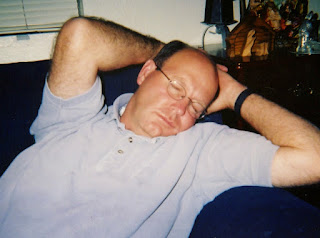 They say Jim Abney is one of the good ol’ boys,
To make him happy, just share your toys.
He likes to wrestle, laugh and leap,
But by afternoon, he falls asleep!
© 2011 Stephanie Abney

I married a man named Royal.
I have found him to be quite loyal.
He is the greatest catch I have seen.
Treats me like a real queen!
© 2015 Deborah Royal

Also, if you choose to post your poems on your own blog ~ that’s awesome. But PLEASE don’t just copy and paste my daily instructions, but rather post your poem on your blog or you FB wall or wherever AND LINK BACK TO THIS BLOG POST for others to come here to read the instructions. I’ve spent considerable time researching the poetry forms and writing them up to share with you. Thanks for respecting my work.

Posted by Stephanie Abney at 5:21 AM

Here's my Clerihew of the day:
https://murph4slaw.blogspot.com/2020/04/national-poetry-month-day-21-clerihew.html

Randy
My husband Randy is quite handy.
He fixes things and that’s quite dandy.
The fence, the fridge, the car, the house,
And treats very well his happy spouse.